To Whom Does Fashion Belong? 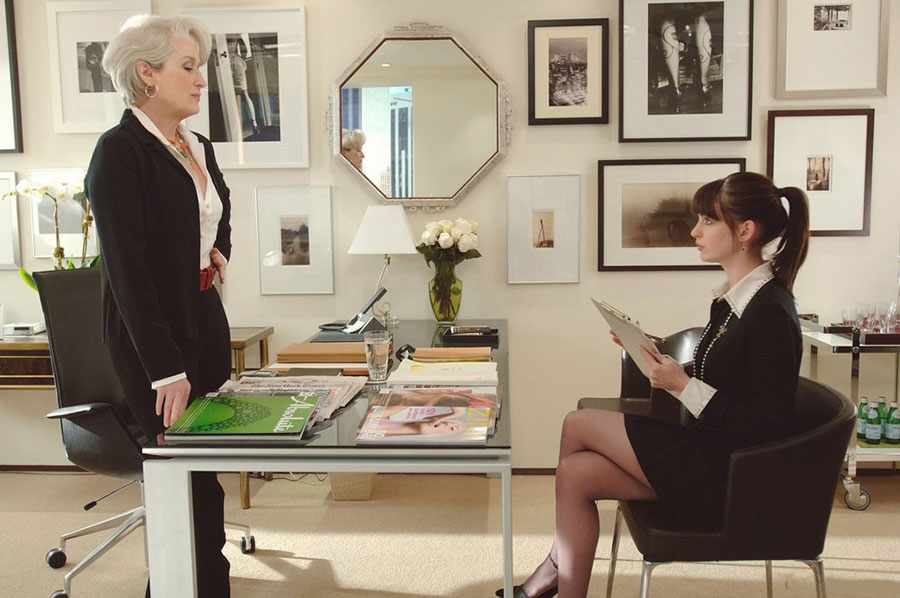 I recently watched The Devil Wears Prada. Again. For the ninth time (and counting). There’s only so much you can extract from a movie about the fickle nature of the fashion industry.

There’s a particular part, where new-and-clueless Andrea Sachs attends her first run-through with Miranda Priestly at Runway. Andrea finds herself scoffing at two teal belts, which appear to look the same to her, while the team has to choose the one to go with a dress. Her ignorance is addressed through a brief, yet searing, lesson from a calm Miranda, who is exasperated at first by Sachs’ use of the words “this stuff” to describe all things sartorial. She retorts with:

“…you go to your closet and you select… I don’t know… that lumpy blue sweater for instance, because you’re trying to tell the world you take yourself too seriously to care about what you put on your back, but what you don’t know is that that sweater is not just blue. It’s not turquoise. It’s not lapis. It’s actually cerulean.”

Now not even I – a stylista who prides herself in the knowledge of all things vogue – know all fifty shades of blue like Miranda Priestly, but the lesson I’m sharing here is that in fashion it’s never just a pair of jeans, dress or “lumpy blue sweater.” I may appear strange to a friend like Andrea Sachs (before Nigel worked his magic on her) when I ogle a pair of black boots, because to her, all black boots may appear the same. There are so many layers to every garment in this industry. Every garment has a designer and yes, a designation.

They’ve called it a field of the frivolous and extravagant. They used to say it’s only for slender people. Some have also said without money you can’t look good. These are just a few of the stand-out misconceptions about fashion and this is exactly how fashion has become political.

There seems to be those who appreciate fashion, and those who merely wear clothes. A situation that begs the question: to whom does fashion belong? It may seem the answer is staring you in the face, but has become more complicated since fashion became less haute couture and more ready-to-wear. It was easy before to attribute style to only the well-heeled and brand-clad, svelte women, but since the advent of international, affordable chain stores in our malls, almost everyone can now be considered well-dressed. The thing about these international chain stores (thank you Cotton On, Topshop and Zara) is that they have managed to tastefully cater for a mass market – they have designed and made clothes for the imperfect model. The sweatpants, the boyfriend jeans, the oversized tees and oversized coatigans have annulled the I-have-to-work-hard-at-the-gym-to-fit-into-this mentality.

It would appear, that the fashion industry has loosened its grip on a stringent aesthetic and wallet-corroding criteria to give those who simply want to dress for comfort a front rowseat. Our very own Mr Price has capitalised on this all inclusive approach and taken it further by getting well-known designers to offer a high-end range at very affordable prices, much like what H&M does with its celebrity collections. Local retail outlet Legit has been doing something similar.

Even for those who merely “wear clothes,” fashion as self-expression has become less of an anomaly. Some people think dressing only for comfort exempts them from any kind of sartorial affiliation, but like previously mentioned, every garment has a designer. Every garment has a designation. What I mean when I say every garment has a designation is that when a designer designs a collection, they have a certain look/individual/event in mind. When a fashion buyer selects a garment they too have a vision. So when Andrea Sachs obliviously picks that cable-knit jersey for the sole purpose of warmth, remember that she  still forms part of the fashion industry.

Oscar Wilde once disdainfully surmised that, “Fashion is a form of ugliness so intolerable that we have to alter it every six months.” Those who distance themselves from fashion may agree, but what the author of De Profundis failed to acknowledge, was that although seasonal changes are necessary, a lot of classic styles and quintessential items are rotated and reinvented to suit the industry climate (pun not intended) of the time.

I also have to debunk the myth that fashion is only fashion when the price tag is blinding. A while back I wrote that society has programmed us to believe that the larger the price tag, the better we will look. Magazine editorials sell us an opulent lifestyle that trigger a need to buy just a single item from a brand to become associated with that opulence. My reality is that I have looked runway-ready in a vintage fur cape and in high-waisted R99 sale-items from YDE without breaking my budget. You see, another interesting  fact about fashion is not how much it cost, but how you wear it. Let’s not forget that thrift stores are now all the rage since basse couture became a thing (here’s looking at you, hipster friends) – and who doesn’t love end-of-season sales?

Fashion is no longer just for the elite few. It may not be understood by everybody, but it’s definitely consumed by everyone (willingly or not). Clothes on fashion show runways may feature in the smaller sizes, but clothes in the stores are made for you. And as for good taste? Well taste is subjective I guess this is why fashion has now reached a level of democracy.

The pursuit of wisdom and style by a petite lady. Radio presenter, fashion writer, newsreader and producer.