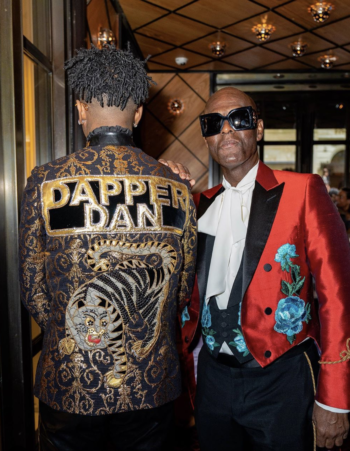 5 things we can learn from Dapper Dan

Backstory: Last year, I attended the GTBank fashion weekend in Lagos, Nigeria , and had the opportunity to attend a few masterclass events headlining a number of international fashion creatives and entrepreneurs including Dapper Dan.

Here are 5 key take outs from the Dapper Dan Masterclass.

1.In the face of challenges, start with your idea and find a way

“I had to make a choice and that choice was going into fashion and when I opened up my store, I was surprised to find out that the major companies wouldn’t sell to me. So what I had to do, was figure out a way to sell to people of colour like myself, without having to buy from the major brands.

“I was in Africa in 1968 and when I returned in 1973 to Monrovia, Liberia I had a Fulani tailor that made me some clothes. And then I always remembered that African tailors had this great skill. I was downtown and I decided to give out one of my business cards to a Senegalese man who was selling clothes on the street and I told him if he knows any African tailors, he should get in touch with me.” Eventually, Dapper Dan had over 20 tailors working in the studio/store in Harlem, NYC.

“Because middle class people of colour wouldn’t shop with me (they prefer to shop downtown and in major brand stores) I had to come up with ideas that would gravitate them towards Harlem . So one day someone came to the store and had a Louis Vuitton bag and everyone was excited about this bag. Louis Vuitton, Gucci and all the major brands were not making clothes at the time so when I looked at that bag and I thought, if everyone is excited about that, “here’s a way I can get them to come to downtown”. So I came up with a concept on how to take these symbols that were so popular with people of colour and turn them into full outfits. So if someone is happy with a LV pouch, imagine if I can make them walk around looking like it. So, I came up with the concept of printing any logo all over the garment and that’s what they were attracted to.

“There are so many people who still aren’t aware of the fact that I’m the originator of what’s known today as logo mania. Look at the brands today, every time you see them and you see the logo all over the brands, that’s logo mania.” Dapper Dan

“The reason I’m into fashion is because of what it has done for me. We found the beauty of clothes and how it transforms you and makes you feel like somebody, so if you’ve got on a really rich looking outfit and you’re downtown, you instantly become “important” to anybody around you. Clothing became very transformative for us because before clothing, we would go to church on Sunday and jump up and down while feeling the Holy Ghost. Dressing became the new Holy Ghost, that feeling you get when you shop.”

3. Be in tune with the ‘zeitgeist’

“At the same time that I was opening my store, it was the birth of Hip Hop. It was the first time ever that we (black people) had a cultural platform that we can operate on, (where) we can make money, globally. I needed to have that interpretation of that culture, so we wanted to be sharp. Hip Hop artists were coming into this new thing, so I thought, “Hip Hop always talk about being rich and glamorous” so I took elements of luxury brands and designed it so it could fit Hip Hop. Nobody really paid attention to it for 7 years until Mike Tyson had a fight in the store and then the whole world became conscious of that fact that this is where it was coming from.”

4. Look at the relationship between Fashion and music

“One of the reasons I came here (Nigeria) was to look at Afropop. It is a great platform for people in Africa to use as a vehicle to create other avenues for revenue, especially fashion.”

5.Generate excitement for yourself, and your brand.

“If you cannot generate excitement, you won’t build a brand. You have to latch on to someone who’s exciting. It all goes back to excitement. Today, the major brands endorse exciting people….{anybody else thinking the recent announcement of Fenty Maison with LVMH ?} … they don’t necessarily have to have the best style. Pay close attention to the stars that you see wearing my things today. They have these big logo’s written “Dapper Dan”. This is not something they would normally wear. The reason that they are, is because there is a story and excitement. And they want to identify with that because they know what that journey was about. It becomes a legacy and a story that becomes something they want to buy into.”

If you impress someone today with what you made, that has more power than just putting the design on the internet.