Heritage in a world of Fast-Fashion. 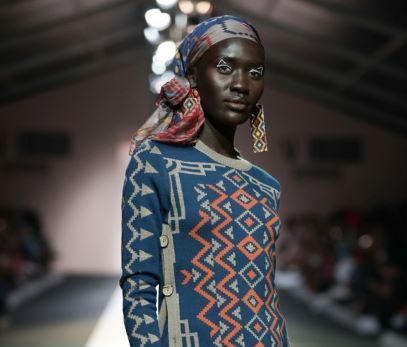 We talk to local designers and a fashion researcher to understand the influence and history of southern-African heritage textiles, today.

As a Botswana-born, South African-raised, Kenyan millennial – heritage and tradition have been ever-present notions throughout my life. However, my sense of origin, belonging and cultural preservation have often felt more idealistic than a lived reality.

In this regard, I’ve often admired the ways in which my peers balance their past and present, straddling the cultural and contemporary aspects of their lives with enviable ease.

Thanks to them, African music, literature, film, hair and design have been experiencing a renaissance, and South Africa is no exception. Local creatives have spanned the globe presenting fresh, reimagined and often unexpected interpretations of their culture and country.

However, amid this welcome embrace of our continent, I’ve often wondered about the relevance of a particular element that underpins our African designs and aesthetics – the heritage textile.

What do heritage textiles mean to local designers today? And how are they putting their own spin on culture through their creative work?

It seems many local designers have been applying the unfailing custom of turning to traditional textiles as open canvases for storytelling and a reformation of culture through their own lived experiences.

“The celebration of culture and heritage through the intricate design and symbolism of the Zulu and Xhosa traditional attire and textiles, influences the colourful designs that I create,” says Sino Xaba, textile designer and founder of Egoli Textiles.

“Although my designs are very modern, every textile design and fabric print that I make has design elements from both cultures.”

For Sino, heritage is as much a way of life as it is the foundation of her work. When I asked her which of her collections she was most proud of she said,“All of them. But if I had to choose one, it would be the Ezethelo fabric print-it is a textile range that celebrates sustainability.

“Ezethelo loosely translated means harvest in Zulu. African women plant and harvest the land [and] they are very informed about the sustainable and eco-friendly process of production, from food to textiles to clothing. Sustainable living is a deeply rooted way of life for many rural African women, and I hold on to these principles and apply them in both my personal life and business processes.”

She adds, “The patience and hard work that goes into planting a harvest relates to almost all aspects of life, growth and success.”

Footwear designer and founder of the iFele brand, Reggi Xaba, (no relation) says, “design is a form of expression albeit in a lesser intensity than fine art. “Like all forms of artistic expressions, the authenticity of the creator is very important and as a designer I express myself – my heritage – through my work.”

Reggi acknowledges his references to English-colonial and Indian culture in his Zulu- inspired collections, blurring the borders between the South, East and West.

“The modern Zulu culture was obviously influenced by the English-colonial people first and later by the arrival of the Indian people. Another major factor was migrant labour which brought new materials the early Zulus found in cities, such as plastic, rubber, metals and textiles.”

While Western influences continue to be firmly embedded in local fashion, it seems that the power to redefine the southern-African aesthetic lies with our local designers, like Sino and Reggi, who consciously proffer a collection that encapsulates the multifaceted identities of southern Africa.

When I asked Reggi how the West has taken to his work he said, “We sell very well in France and London and we also started selling in California.” He proudly adds, “The world is ready for Africa. They appreciate good quality and materials that compare with what they are used to. This is what we pride ourselves with.”

We’ve seen international success with other Afro-contemporary designers such as Laduma Ngxokolo, the Port-Elizabeth-born designer whose Xhosa-inspired knitwear has captured the hearts of fashion-lovers here and abroad. Others have gone as far as recreating their own culturally-based textiles, like Palesa Mokubung whose Mantsho brand captured the attention of H&M, making her their first African fashion collaborator.

As a result, the so-called African narrative has taken on many forms, in some cases embracing heritage as a point of departure, whilst straying away from the more stereotypical notions of the continent.

“This shift in claiming pride in cultural traditions and including the visual and material references into contemporary fashion collections, points to an important global shift in thinking about modernity beyond the singular, western idea,” says Erica De Greef, who’s been at the forefront of African design and fashion history as a curator, researcher and African fashion consultant.

To better understand the broader context of southern-African heritage textiles in fashion, Erica begins with an illuminating insight,“The long-held binary of tradition versus modernity meant ‘traditions’ remained outside of fashion, relegated instead to important ceremonies or special occasions.

“This meant that textiles and related craft practices that referred to cultural practices were largely placed outside of fashion too. The long-held definition of fashion continued to reproduce to the exclusion of other fashion systems, albeit regularly drawing on them as exotic inspiration.”

A full account of southern-African heritage textiles is fragmentary at best, and the empirical research or lack thereof is glaringly evident, thanks in large part to the ever-present effects of the country’s past and the nascency of the local fashion industry.

“The absence of archives or knowledge about ‘traditional’ textiles stems from the same binary that kept them out of fashion. As part of a larger system of segregation, textiles that were popular or commonly used in cultural contexts were often deemed ‘unchanging’ and therefore, often when they formed parts of museum collections, they were included without reference to their maker or wearer or date,” says Erica.

“In retrospect, the difficulties of museums to properly understand or reflect the evolutions and changing use and make of these textiles, has meant that most representations of these ‘traditional’ textiles are completely lacking in critical detail. The collectors too were responsible for this gap in their own record keeping.”

Reggi believes that the responsibility to preserve his culture’s textiles is the “domain of books, filmmakers and museums. We need to invest in this sector as a country. Designers must stay in their lane and reflect contemporary culture in a dynamic sense.”

For Sino, her contribution to preserving culture is one of narrative, offered in the naming conventions of her textile designs and fabrics. “[This] is important to me because in African tradition our fabrics tell a story about who we are. The fabrics are also a story for the future generations to celebrate African design and cultural designs.”

Despite the challenges in understanding the true history and evolution of our heritage textiles, local designers, by affirming them within the context of the broader contemporary fashion landscape, are emerging with their own modern take on heritage and culture, opening an opportunity to export authentically nouveau southern-African design narratives.

I’ll be keeping a close eye on this growing movement and designer collective who continue to inform the future inspired by the past .